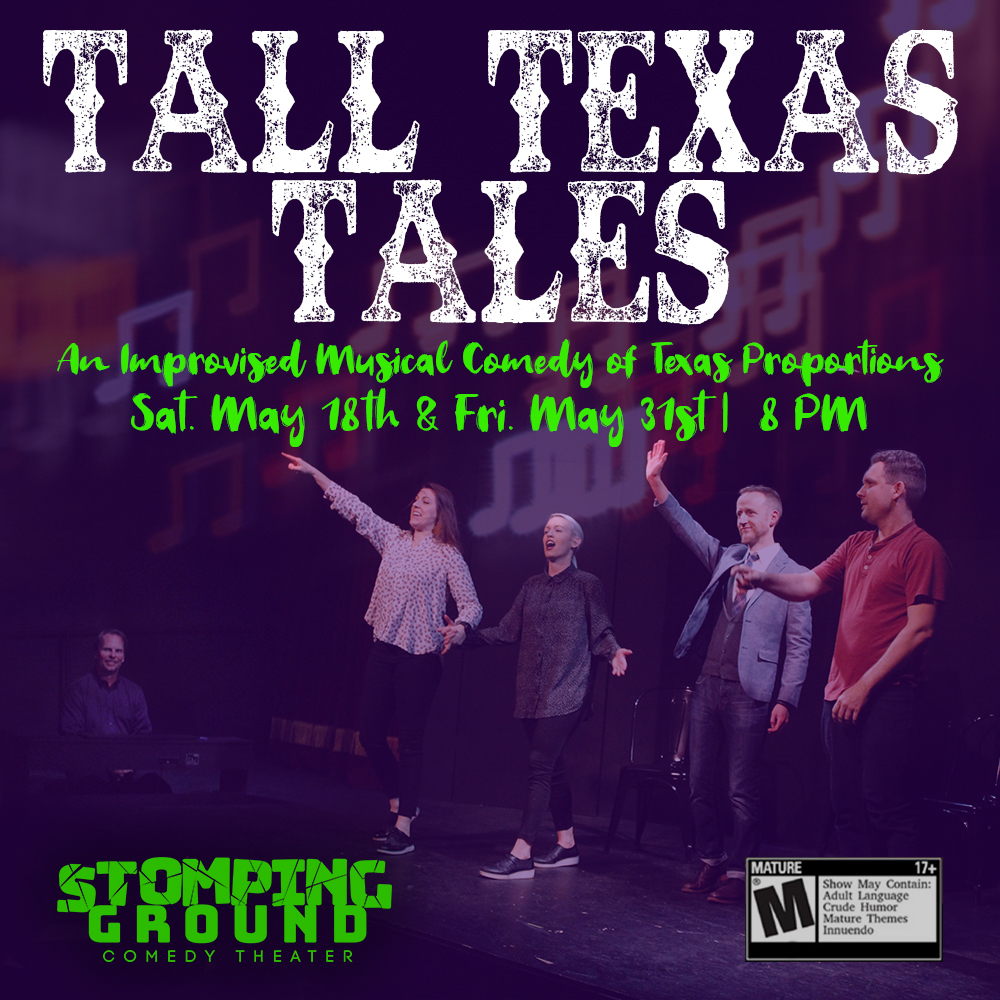 The premiere Stomping Ground Ensemble comprised of Creative Team Members and instructors, they use true stories to help inspire improvised songs and scenes. Their improvised lyrics, harmonies, and larger-than-life characters are sure to give you a warm Texas welcome. Occasionally we have a special guest telling stories, so be sure to check social media to find out who our guest is for each show!

Tall Texas Tales is recommended for ages 18+. Seating starts 15 minutes prior to the show. Stomping Ground is BYOB. 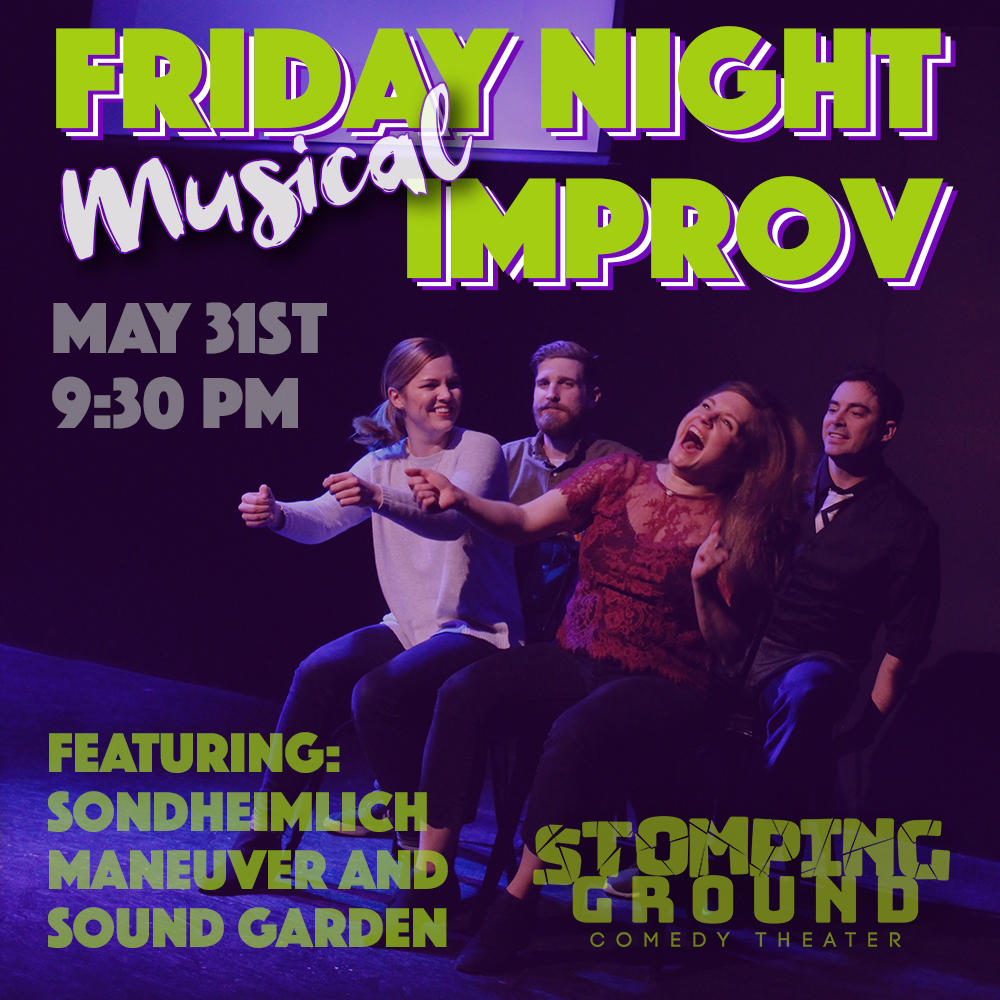 Musical Improv Comedy brought to you by SG Musical House Team Sound Garden and Sondheimlich Maneuver from Alternative Comedy Theater. Sound Garden is Stomping Ground’s newest musical house team featuring a tight ensemble of vocalists and performers. With their signature tight harmonies and catchy choruses, you’ll walk away humming and wanting more! Sondheimlich Maneuver improvises a musical right before the audience’s eyes based on a single world suggestion. Sondheimlich Maneuver will dazzle you with their beats, vocals, and free-wielding style of play.

This show is rated M for Mature. Stomping Ground is BYOB. Seating begins 15 minutes prior to the start of the show. 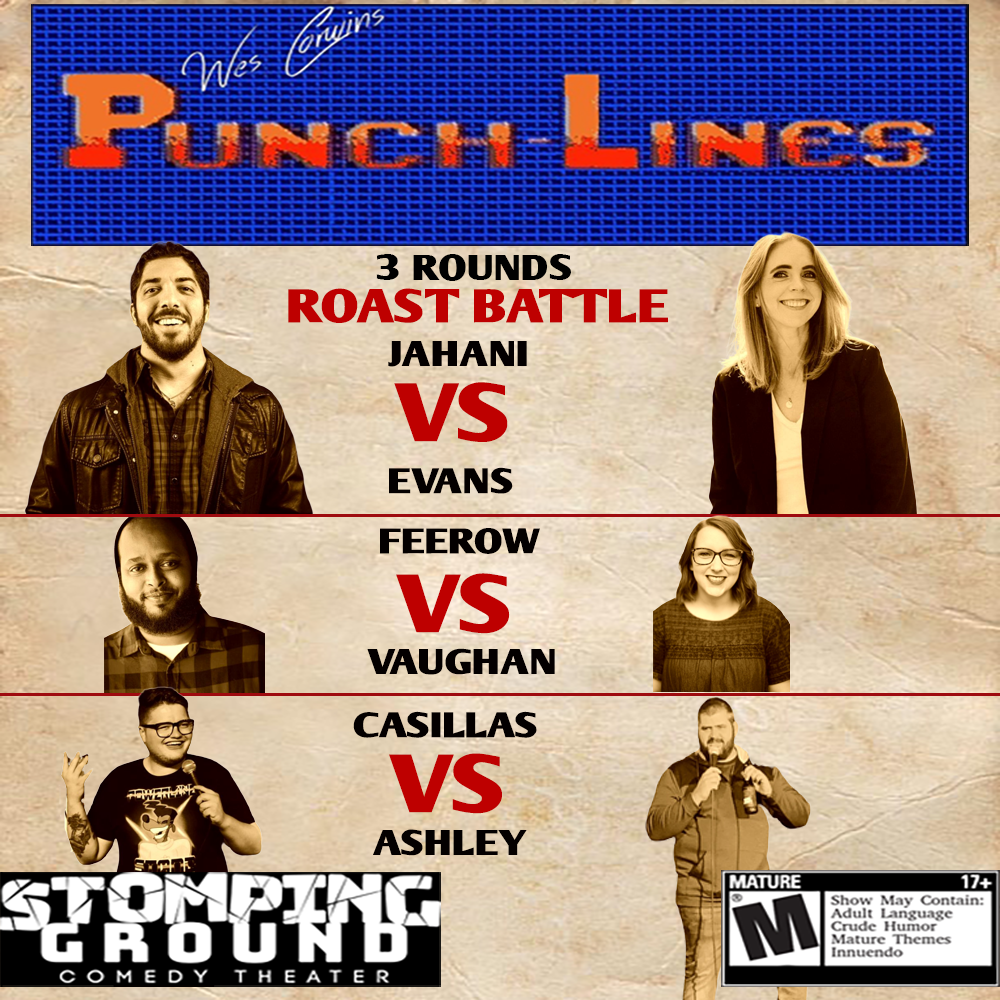 Roast Battle- the thinking man's UFC. Three matches a night. In each match, Two titans of comedy in the Dallas-Fort Worth metroplex will take turns roasting each other into cinders. Only one will walk away the winner. The other will be roasted into cinders… (metaphorically).Complete with pre-battle video packages, a judges' table and a ringbell, Punch-Lines takes all the fun of a live event like pro wrestling or ultimate fighting and it turns it into a hilariously harsh comedy war! The rules of Punch-Lines are simple. We start with a coinflip. The person whose name comes first alphabetically gets to call it. The winner of the coin toss gets to decide whether to first “Roast” or “Be roasted”.

Each match-up consists of three rounds. The comic who wins two out of the three rounds gets bragging rights in perpetuity forever.The May 31 bout will feature lawfully wedded duo Katy Evans and Shahyan Jahani battling it out, Paulos Feerow and Hannah Vaughan going head to head, and Tony Casillas and Elias Ashley rounding out the evening.

This show is rated M for Mature/18+. Stomping Ground is BYOB. Doors open 15 minutes prior to the start of the show.