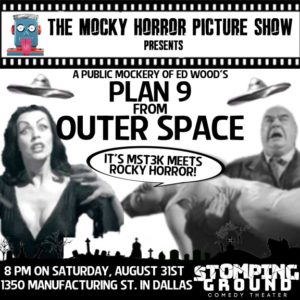 What happens when you combine the movie mockery of Mystery Science Theater 3000 and the live interaction of a Rocky Horror Picture Show screening? You get “The Mocky Horror Picture Show”, a new, late-night, movie-riffing comedy show coming August 31 to Stomping Ground Comedy Theater! The show features a live screening of a classic schlockfest while comedians Liz Barksdale, Bryan Hickey and Danny Gallagher mercilessly mocking the entire film and the audience gets to join in the riffing with special on-screen prompts!

“The Mocky Horror Picture Show” will make its venue debut at Stomping Ground Comedy Theatre with a special public mockery of director Ed Wood’s sci-fi anniversary “Plan Nine From Outer Space” in honor of the film’s 60th anniversary. We’ll have also special contests and prizes to give away during the show!

This show is rated M for Mature/18+. Stomping Ground is BYOB. Doors open 15 minutes prior to the start of the show. Please note that ticket prices increase by $2 at the door so be sure to get yours in advance!