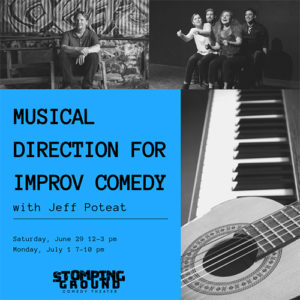 Stomping Ground is looking to add to its team of paid musical directors for house teams and musical improv shows and we’re giving you an opportunity to learn from one of the top Improv Musical Directors in the country. This workshop will focus on musical direction for improvisational comedy, including underscoring, supporting and understanding scenes, providing accompaniment for improvised song, and more! There will be a keyboard used for this workshop but those interested are also encouraged to utilize other instruments (such as guitar) and are encouraged to bring their own. Limited scholarships available- please email lindsay@stompinggroundcomedy.org for more info.

Must be 18 or Older to Purchase or Attend Class. All sales are final. Refunds are not available on classes but we are happy to shift your registration to a future class. Stomping Ground Students get free admission to all shows while enrolled in classes.

Jeff is a multi-faceted entertainer with over 35 years in the industry, covering a wide array of media, venues, and styles. He is proficient in keyboards, guitar, percussion, and voice, and he has performed with numerous groups and acts throughout the U.S. He’s shared the stage with such performers as Travis Tritt, the Drifters, 38 Special, and many others. As a screen actor, he has appeared on Dallas, Prison Break, Friday Night Lights, and many more. As a stage actor, he has appeared in dozens of plays, operas, and musicals, including South Pacific, Oklahoma, Much Ado about Nothing, and The Wizard of Oz. Jeff spent several years as a member of Dallas’ longest running improv comedy troupe, Ad-Libs, and has appeared as an actor or musician in several commercials. As a studio musician, he has appeared on dozens of recordings, produced and engineered four albums, played on the award-winning Party ‘Til the Break of Dawn by Rick Strickland, and enjoyed international airplay with the groups Shagtime and Note13. He has written and produced two musicals, Big Box-the Musical and Bully-the Musical. He holds state certification in Texas in K-12 Music and Theatre, and national certification from Full Sail Academy in Digital Recording and MIDI Implementation. He is a member of TMEA, NafME, and Phi Mu Alpha Sinfonia.