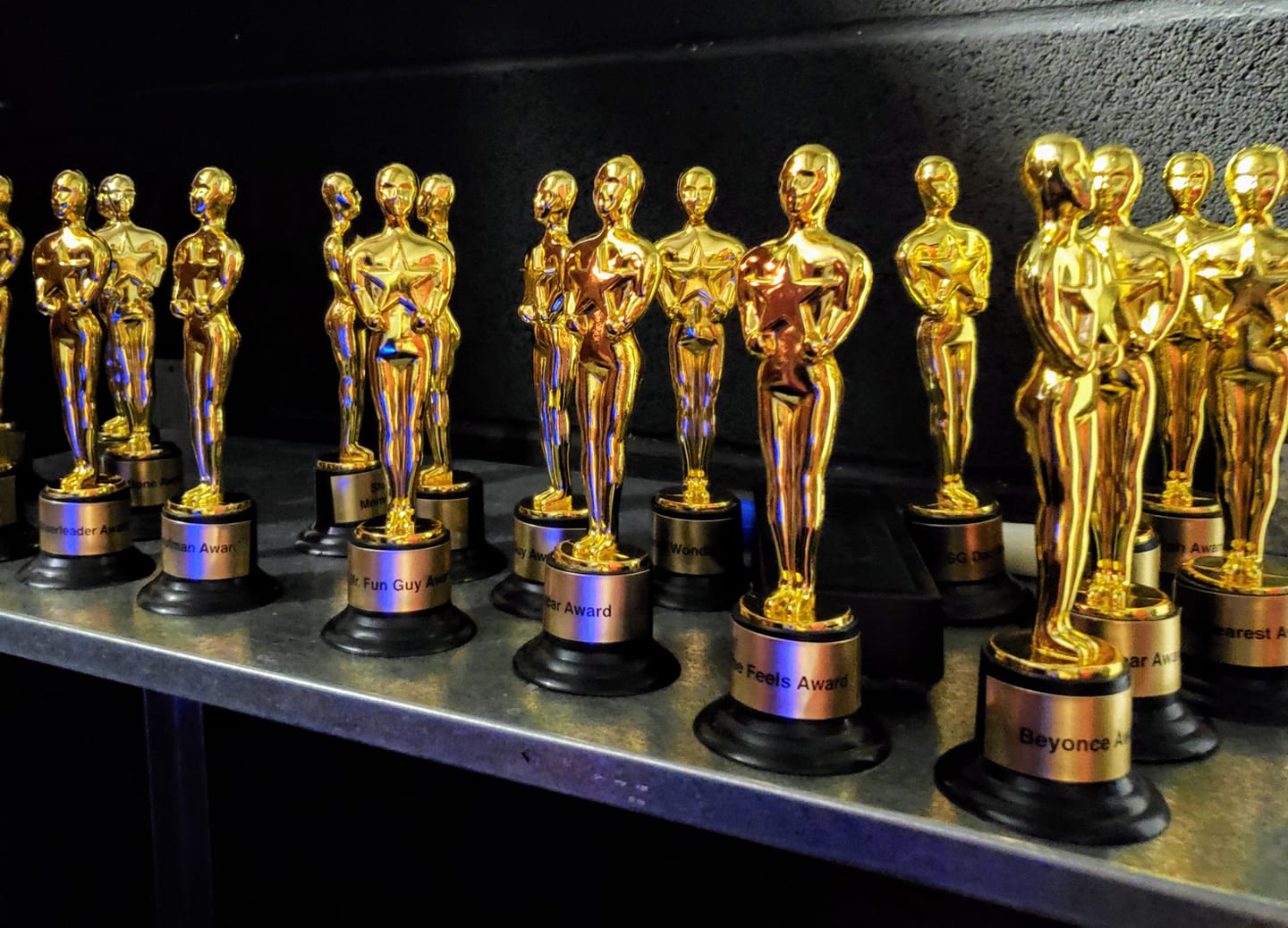 Stomping Ground held its first ever Staff Appreciation and Awards Party, organized by the Board of Directors and sponsored by Peticolas Brewery, Raising Canes, and Ferris Wheeler’s Backyard & BBQ.

It was a night of laughter, fun, and awards!

There were also karaoke performances, including Danny Gallagher with a silently rousing Uptown Funk, Chris Sanders with Total Eclipse of the Heart, John Dixon with Gay Messiah, Ashley Jones with Maybe This Time, and a rousing group version of Como la Flor by Natalia Borja, Diane Michelle, Alicia Nava, Chris Sanders, and Tiffani Rodriguez just to name a few.

Here is a full list of all the winners of the night:

These individuals were the pulse of SG on the weekends and their hard work, countless hours, and care kept the theater thriving!

SG could not stay afloat without the help of these individuals. Not only are they hard-working and kind, but also dependable, talented, and funny.

Light at the End of the Tunnel Award– Most Likely to See the Positive When the Sh*t is Hitting the Fan: Jocelyn Tiner

White Night Award- Most Likely to Save the Day: Diane Michelle

Triple Threat Award– Most Involved and Good at Everything: Jacie Hood

Playground Award– Most Likely to Make Any Moment Working with Them Fun: Ashley Rountree

Mom Award– Always There to Listen To Your Problems, Give the Best Advice, but Still Call You Out On Your Sh*t: Lindsay Goldapp

Dad Award– Most Likely to Listen to Your Problems and Then Buy You a Beer: Cameron Goldapp

Confetti Award– Most Likely to Find a Reason to Celebrate: Diane Michelle

Small Wonder Award– Most Likely to Spreadsheet your Problems Away and Create a Genius Solution: Jocelyn Tiner

Beyonce Award– Most Likely to Help Out When Needed and Look Fierce When Doing It: Lindsey Hertel

The Tarantino Award– Instructor Mostly Likely to Make You Have Your Biggest Breakthrough: Jason Folks

The Feels Award– Instructor Most Likely to be Moved to Tears in Class and Connect with Students : Jason Folks

The Cheerleader Award– Most Encouraging Instructor: Tyler Via

The Carebear Award– Instructor Who Cares About Their Students the Most: Greg Silva

Mommy Dearest Award- Most Likely to Play Your Mom in a Scene: Jacie Hood

Funny Bone Award- Most Likely to Get the Biggest Laughs: Jim Kuenzer

Killer Performer Award- Most Likely to Kill Someone in a Scene: Rachel Farmer

Clutz Award- Most Likely to Injure Themselves Onstage: Lauren Oxford

The Drifter Award- Most Likely to Go Out into the Audience During a Scene: Tyler Via

The Breaker Award- Most Likely to “Break” in a Scene: Meili Chao

The Stardom Award- Breakthrough Performer of the Year: Katie Dallas

Support Bra Award- Mostly Likely to Support You In a Scene: Logan Romero

Amazing Race Award- Most Likely to Amaze You: Jamie Zeske

Pig Award- Team/Show Most Likely to Make You Laugh So Hard You Snort: Irregular Nonsense

Shock Yo Momma Award- Team/Show With the Most Absurd Content: Baby Cats

Unique New York Award- Team/Show With the Most Unique Format: Quest in Show

The night was one to remember. Special thanks to Peticolas, Ferris Wheeler’s, Raising Cane’s, August Edwards, Michael K Bruner Photography, and the Board of Directors for a great evening.

Click here for the full round up of photos by Michael Bruner.