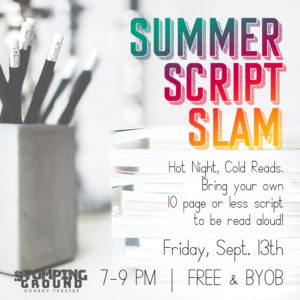 Join us for the first Stomping Ground Script Slam, an open mic for writers! Bring your original scripts and acting talents to the SG stage. Writers can bring any script 10 pages or less and actors will be assigned roles upon arrival. Be sure to arrive early as reads are first come, first serve. We will read as many scripts as we can prior to the 9:30 show.

This event is FREE and BYOB. Some scripts may be rated M for Mature, so discretion is advised.